Sold: A Novel by Patricia McCormick 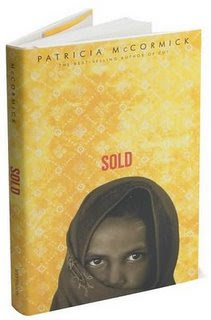 In Sold, American author Patricia McCormick's coming-of-age novel, the harsh reality of life in a mountain village in Nepal is presented in stark vignettes. The story of Lakshmi, a girl in the village of Goldhunga, narrated in first person, is deceptively simple yet very poignant.

A graduate of journalism from Columbia University, Patricia embarked on a research of Nepali girls' trafficking into India (some estimate says 12,000 of them are trafficked to India every year), through a grant by New York Foundation for Arts. The result was a heart-wrenching story of a girl, mired in poverty, sold into prostitution in an Indian brothel. The characters are thinly veiled real life people.

The 269-page novel, which was a finalist for the US National Book Award 2006, depicts the tragic life of women and girls in rural Nepal where a cruel combination of illiteracy, poverty, superstition and backwardness force them to survive in very tough circumstances.

Flipping through the pages of Sold, I was reminded of Sandra Cisneros, the Latino author of The House on Mango Street. In several vignettes, Cisneros weaves the stories of Esperanza, a Mexican-American girl growing up in the United States. The only thing common in these two novels is the method of storytelling. Unlike Esperanza's, Lakshmi's world is that of deprivation, abject poverty and hardship.

However, a vignette titled “Difference between a Son and a Daughter” can be likened to the one in The House on Mango Street: “Boys and girls live in two different universes.” In Nepal too, during childhood, a son is pampered while a daughter has to follow strict rules in the patriarchal setting. In the story, it emerges that the difference is stark: “A son will always be a son, they say. But a girl is like a goat. Good as long as she gives you milk and butter. But not worth crying over when its time to make a stew.”

Some of the pieces are as short as 3-4 lines; they can be read like poetry. There are white spaces here and there in the book. The author has remarked that the empty spaces are meant to play with the reader's imagination.

In the vignette titled “Maybe”, the mother and daughter indulge in a luxury. It turns out to be a cigarette her mother has hidden for the rainy days. But the euphoria soon ends when the incessant monsoon rain destroys their mud house, rendering them hapless and helpless. Lakshmi's irresponsible stepfather sells her to a strange city woman for eight hundred rupees. Gullible Lakshmi, only 13 at the time, is deceived by everyone: she was thinking all along that she was going to work as a housemaid in the city.

After crossing the border and ending up in a brothel probably in Calcutta, she undergoes inhuman torture at the hands of Mumtaz to whom the so-called uncle-husband (she was instructed to call the trafficker her husband in the Indo-Nepal border in order to deceive the police) sells her to. Before that there are layers of transaction that show a complex web of trafficking. She ends up in a jail-like brothel ironically named Happiness House.

The girls in the brothel, ranging from a 10-year-old to middle aged women, are forced to have sex with strangers. They are caught in an endless cycle of threats. At times the hell-like atmosphere is lightened up with small pleasures. After all, once you are familiar with the surroundings, you grow used to it. Lakshmi meets a boy named Harish with a David Beckham haircut who teaches her some English words. There are characters like Shilpa who loves movies, and Monica who is friendly with her clients. They learn things clandestinely and hide their memorabilia.

When Pushpa, a fellow inmate falls sick, Mumtaz says, “If you don't get out of the bed and see customers today, you are on the street.” The brothel owner's cruelty knows no bounds. Pushpa begs not be thrown out. Mumtaz demands that she sell her daughter. She thunders: “In a few years, when she is old enough, I can make a lot of money with her.”

A vivid scene of police raid in the Happiness House reminded me of a documentary I watched on BBC a few years ago. In it, underage girls were shown emerging from a cave-like room. When tipped off about police raid, Lakshmi and other underage girls are kept in a structure where it's difficult even to breathe.

The story ends as Lakshmi is waiting for a kind-hearted American who promises her to rescue from the hell-hole. In the denouement, Mumtaz is already nabbed by the police but Lakshmi's fate is left ambiguous. The novel poses a question on its beautiful yellow cover: Can she ever be free? The answer probably is no because the cross-border trafficking still goes on unabated.
Posted by Deepak Adhikari at 1:47 PM