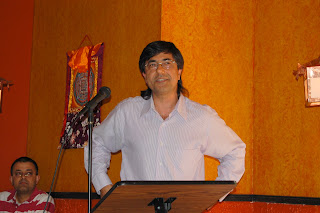 In mid April, I received an email from US based Nepali-English writer Samrat Upadhyay. In it, he informed me about an upcoming event in Washinton, DC in which he was reading excerpts from his book for a charity organization Committed. He wondered whether I was interested to cover the event for Kantipur Daily (Nepali version of this interview is published at Koseli, the daily's Saturday supplement). I mailed him a set of questions and he replied them after the event on April 26:

In an email you said, this is the first time you are reading an extract from your book for a charity event. How did you feel?

It was great to be reading for Community Members Interested (COMMITTED, an all-voluntary nonprofit organization focusing on Nepal run by a group of young, dynamic Nepalis living in the Washington, D.C. area and led by Jayjeev Hada. COMMITTED helps Nepali communities in areas of poverty alleviation, land use, health, and public facilities. It is doing some very valuable work in Nepal. Currently, it’s working with Open Learning Exchange, Nepal, to provide computer-based education to all of Nepali children. I was happy and humbled to be supporting COMMITTED in doing what is clearly encouraging work that’s providing tangible benefits to underprivileged communities in Nepal.

What was the most interesting question from the audience and what was your answer?

The most interesting question was from a waiter at The Himalayan Heritage restaurant in Washington, D.C., where one of the readings was held. The young man had read all of my books and asked me whether the decrease in depiction of sex in my subsequent books after Arresting God in Kathmandu had to do with any external pressure or criticism I might have faced. I was struck by how eloquent, and forthright, the young man was. I answered that I was younger when I wrote Arresting, and that a writer’s interest and focus can, and should, change with books. I also cautioned him not to discount erotic scenes from my forthcoming books entirely.

What is your thought on art as an instrument of social change? Are you for Art for Art's sake?

I advocate neither art for art’s sake nor art for social change. Art that’s merely self-reflective can be experienced as narcissist and closed; on the other hand, art that’s geared toward social change can also become pedantic and propagandist. On the whole, I do believe what Nobel Prize-winner writer Nadine Gordimer, quoting Barthes, has said: that a writer’s enterprise is his “essential gesture as a social being,” that the creative act is not isolated and self-enclosed, that “history evidences it, ideology demands it, society exacts it.” Art, if used properly, can provide both aesthetic pleasure and be a tool for social change.

Can you tell us about your upcoming novel Queen's Pond?

The Queen’s Pond (now named Buddha's Orphans) charts the life-history of two characters from their childhood to old age, and in the process covers several decades of recent Nepali history. It’s the story of an orphan haunted by visions of his mother who abandoned him, of a young woman who abandons her life of privilege to marry for love—of a country’s rapid, whirlwind transformations. It’s the longest work I’ve written; it was close to 800 pages in its original draft, but now it’s whittled down to a little bit more than 500.

Your last book was titled The Royal Ghosts, your upcoming novel is The Queen's Pond? Why this fixation on royalty? (at a time when Nepal's been declared a republic)

The Queen’s Pond is a reference to Rani Pokhari, not to the royalty that was booted out of the palace.

On your visit to Nepal two years ago, you mentioned about The Queen's Pond saying "it's baffling me." You hinted that the form is new. Can you elaborate on this?

The Queen’s Pond grew out of my desire to write a novel that played with narrative time, that moved back and forth through the history of my characters. My previous novel, The Guru of Love, had been a strictly chronological affair, with a plot structure that was linear and uncomplicated, and with three characters around which the story revolved. The Guru of Love was the perfect tale for a first-time novelist. But for my second novel I wanted something that’d use the capacity of the novel form to stretch our conventional notions of time, especially in relation to Nepali history. In retrospect, it seems that I wanted to demonstrate that our lives are intertwined with lives from the past, that “life repeats itself,” if you will. For this reason writing the novel was difficult and challenging. And at that time when I talked to you, I was still struggling with it.

The recession is hitting every industry in the US. Is book publishing affected?

Certainly. If anything, it’s even more difficult to get published in the current economic environment. The big American publishers are suffering, and mid-sized publishers are faring badly. Literary fiction in particular is not doing well.

Tell us about your upcoming visit to Nepal.

I will be visiting Nepal the first two weeks of July, and I will be bringing with me two of my graduate creative writing students from Indiana University, poet Magda Sokolowski and fiction writer Andres Sanabria, for a literary/cultural trip. The trip is a result of a grant provided to me by Indiana University, and the project is titled, “The Writer in the World: Cultural Space and Displacement.” During their stay in Nepal, Magda and Andres will, apart from visiting cultural sites, conduct writing workshops with some school children as well as participate in literary interactions. Once they return to the U.S. they will write creative pieces that address their transformative experience. It’s the first time this has happened in our program, so the students here are very excited.

Links: My piece on Samrat published at OhmyNews International
An old blog post after the release of The Royal Ghosts

Check out pieces written by Magda and Andres after their Nepal trip:
Pic courtesy: COMMITTED.
Posted by Deepak Adhikari at 12:28 PM