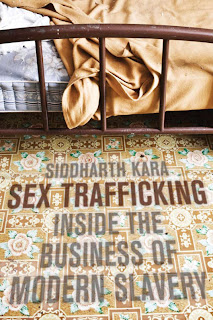 In the autumn of 2008, I and a friend working with an NGO run by sex-trafficking victims embarked on a research of sex trade in Kathmandu. Having previously worked on the subject for a cover story at Nepal Weekly magazine in 2004, I had some understanding of the subject. But my second attempt at exploring the dark side of this gruesome trade would prove to be a difficult experience. I met a girl, barely 14, who was trafficked from Dang and was forced to work in a run-down Gongabu restaurant that doubled as a brothel.

After listening to the girl’s harrowing story at a nearby shelter, my friend and I visited the restaurant where the waiters seemed laidback and the tea arrived after much delay. As we sipped our tea and scrutinised the place, the modus operandi started to unravel itself. A young woman who was applying lipstick and carelessly grooming herself seemed to eye us as prospective clients. Pin-ups of scantily clad models adorned the walls. Sitting there, I wondered about the misery the young girl had told us about.

I was reminded of this while reading Sex Trafficking: Inside the Business of Modern Slavery by Siddharth Kara, the first fellow on human trafficking at the Kennedy School of Government at Harvard University. Kara came face to face with the horrors of slavery in mid-1990s when he visited a refugee camp in Slovenia where he saw first hand the refugees living in limbo, and in utter despair. The Slovenian sojourn left an indelible impression on him.

Haunted by that, in 2000 he resolved to put aside his job as an investment banker at Merrill Lynch and began his life’s mission: to unveil the workings of sex trafficking. He visited brothels, massage parlours, sex clubs and met all those involved in this trade. After traversing 18 countries and interviewing more than 500 victims, he has produced a very compelling book.

Sex Trafficking provides answer to one of the world’s most appalling (some would say the oldest) trades: selling sex. The book—which covers India, Nepal, Europe and Africa—analyses in detail the economic aspect of sex trafficking. “Sex slavery is primarily a crime of economic benefit,” he writes. According to Kara, the origin of sex trafficking can be traced to a few phenomena: collapse of the Soviet Union, spread of globalisation and capitalism. “The supply of slave erupted in 1990s concurrently with the havoc wreaked by economic globalisation,” he writes. He suggests: sex trafficking is the most profitable industry because the labour cost is very cheap.

The book opens with the story of Maya, “a gaunt and distressed” 19-year-old from Sindhupalchowk, who spent “four years as sex slave in each of Mumbai’s two main red-light districts, Kamathipura and Falkland Road.” Maya was duped with the promise of a job at a carpet factory in Kathmandu. Once in the Indian brothel, she was raped, tortured, starved and even drugged. Finally, she fled, but only to discover that she was infected with HIV. Even returning home was fraught with stigma. “They (the rescuers) helped me contact my father, but he told me not to come home. He said I can never be married because I have HIV. I can only bring shame,” she tells the author. She had come out of the brothel in Kamathipura that was established in the 17th century for the service of British troops.

Globally, 500,000 to 600,000 women are trafficked every year. The reasons outlined by the author are poverty, bias against the gender or particular ethnicity, lawlessness, military conflict, social instability, and above all, disparities in economic opportunity. Along the shady edge of the huge movement of people and demand for sex and money, sex trafficking thrives.

Kara says factors such as corruption in law enforcement, border control and judicial system allow traffickers to conduct their business with minimal consequences. When he says “police take bribes in every country I visited to allow sex-slaves establishments to operate” it sounds like he is talking about Nepal. “Lack of coordination among origin and destination countries also hampers prosecution of trafficking crimes,” he writes, “…The absence of political will to enforce the law, as well as endemic corruption, allows trafficking…”

At one point, a victim’s mother laments: “So many bad men are hurting young girls. How can we stop them? Is there any end to the suffering of women?” Kara suggests a number of ways to control the trafficking. He urges the UN to create an international slavery and trafficking inspection force; targeted and proactive raids against establishments that have sex-slaves; forming fast-track courts to prosecute trafficking crimes; and imposing stringent laws with massive penalties for traffickers.

As a work of narrative journalism, Sex Trafficking is gripping. It’s erudite, evocative and above all an engaging read. No other work has dealt with the subject as comprehensively. The book deserves a wide readership.
First appeared at The Kathmandu Post.
Also check my review of Sold, a novel about a Nepali girl trafficked to India.
Posted by Deepak Adhikari at 9:34 PM

VidFootie - High on football said...
This comment has been removed by the author.
12:47 AM

the article should be published through mass communication.

We are urgently in need of kidney donors in Kokilaben Hospital India for the sum of $450,000,00,All donors are to reply via Email only: kokilabendhirubhaihospital@gmail.com
WhatsApp +91 779-583-3215

My name is Dr. Ashutosh Chauhan A Phrenologist in Kokilaben Hospital,We are urgently in need of kidney donors in Kokilaben Hospital India for the sum of $500,000,00,All donors are to reply via Email only: hospitalcarecenter@gmail.com or Email: kokilabendhirubhaihospital@gmail.com
WhatsApp +91 7795833215